He sits on his saddle on top his horse. He drinks a bottle of whiskey as he watches the town below. His eyes glow with revenge; his face stern. He sets his whiskey bottle in the pouch he has on his saddle, checks his hat on top his head, and grabs the reigns with his gloved hands; he then turns his horse ‘round, and makes it begin to stride slowly forward. He goes in the opposite direction of the town, but he doesn’t go without a plan. A plan to gain revenge..


He saw him.. He saw that son of a bastard. Sheriff Pete looked up at the hill above his town and watched that no good outlaw stride off with not even a look back. What was that man up to? Sheriff Pete had no symphony for the outlaw though. And if it came to it, he would protect his town from him. From that outlaw on top that hill, from that son of a bastard who leads all the other bad guys around the state, from his flesh and blood, from his own brother. Yes, he didn’t like to think about it, that the leader of all the other bad guys and the outlaw he just saw on top that hill was his own brother.
Sheriff Pete tipped his hat to get the sun out of his eyes, sighed a bit, and went back to his own matters.

Alright, people! Finally got this thing up! wewt! I didn't lose anyone for waiting for so long, did I? >>;

Anyway! Everyone can start getting their character sheets done! Wewt!! >D
I'm excited for this. ^^

Name:
Nickname: (Kinda like a cover-up name. Mainly outlaws and the bad guys will be using these.)
Age:

(Hit me up with any suggestions of something else I should add to the CS.)

(ALSO, I WILL BE PLAYING AS THE OUTLAW THAT WAS ON THE HILL IN THE LITTLE INTRODUCTION UP THERE. AND SOMEONE CAN BE SHERIFF PETE. You can change Pete's name if you want. FIRST COME, FIRST SERVED FOR PETE.)
IF no one wants to play as Pete, I'll also take his roll.
O

Date of Birth? What year is the game set in?

I'll work on my character throughout this week. 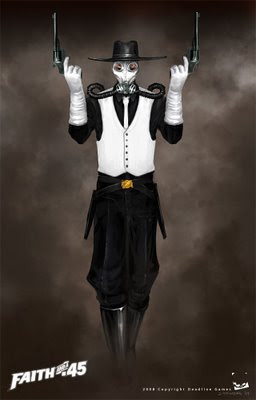 Group: Alone, for now, got a nice little brothel back home though and I'll be going back there when I'm done here.
Rank: Owner, used to lead a gang though.
Weapons: Two colt 6-shooters, and a hunting knife.

Appearance: (pending)
Personality: Takes whats his, and if he wants it and no one can stop him taking it its his. Everything he has it jealously guarded and if someone tries to take whats is they'll be lucky to get a bullet in the head. Cold and vindictive he does not forgive easily.
History: Was once a small-time crook turned gang leader, its is rumored that his gang stumbles onto a legendary stash of Inca gold. While they did find the gold the stumbling was more obsessive following of ancient clues which included the slaughter of a Comanche village to get artifacts sacred to them and follow their clues. Only two gang members other than Robert survived the search and the rumor hints that Robert killed a few of the others himself to split the loot with fewer men. Whatever the truth he has since settled down the owner of a brothel until one of the girls decided t run.

NICKNAME: Deadeye (When he was a lawman, his sharpshooter skills earned him this name)

AGE: 27, looks about 37 due to a rough life that has left him tired and worn.

GROUP: Ex-Lawman. Creed now does work as a hired gun for whoever will pay him.

RANK: Alcoholic Gunslinger. As a rouge affiliate he really has no rank. He sells his services as a hired gun to whoever will pay. 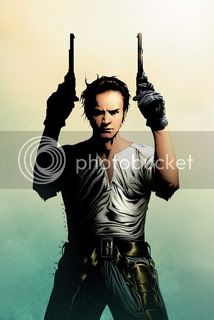 PERSONALITY: Listless and numb to his surroundings. Events of his past have left him caring little about what is going on around him. As long as he has his whiskey and beer he is good. Although his positive morals and sense of right and wrong are still intact, they are buried beneath layers and layers of self pity and doubt.


HISTORY: Creed Evergood was once a lawman. He, along with his fellow deputies were renowned for keeping crime, as well as undesirables, down to a bare minimum within the town's borders. They had a system that was based on brutal tactics and cut throat methods. Creed and his associates realized that in order to eradicated bad men you must act like bad men; Shooting on sight was not an uncommon occurrence. They would have bloody shootouts and vicious bar fights with the outlaws, oftentimes ending with heavy casualties. It was a method that worked, tried and true. Creed Evergood established a name for himself as a renowned Sharpshooter, vigilant lawman and decent person, but one day that all changed.


~Three years prior to recent events~
​
It was a dark night, cloudy and cold. One of those nights where the moons light was barely visible through the thick, low lying fog. An overall miserable scene that would give way to an even more miserable situation. Creed was on duty that night he had a bad feeling, but couldn't place it, instead he just attributed it to to the dreary atmosphere. In the weeks prior, there had been rumor of an outlaw that went by the name of "The rough Rider", apparently he had kidnapped a little girl and was currently riding towards town. Creed had been keeping an eye our for him, but had no idea that he would run into him that night.

As creed rounded a corner, his gunbelt slung low on his hips, his hat tilted down towards his nose, he spotted a man on a black horse and behind him on the saddle was a small girl with her hands tied behind her back. It was The rough Rider! Creed pulled his weapon with seemingly supernatural speed. In a split second he had his weapon cocked and aimed right at The Rough Riders head. He was not worried about making the shot, after all he was nicknamed "Deadeye" for his amazing marksmanship. There was a moment where both the men froze, the only noise that could be heard was the quite whimpers and sniffles of the captive girl.

Everything happened so fast. In Creed's mind the events that followed are a blur ; like a detached dream of a drunk man, distant and hazy.

There was a shot fired from Creeds gun.

The Rough Rider spun his horse at the same second the bullet left the barrel.

The bullet meant for the outlaw strayed.

The little girl was killed.

These events left Creed Evergood a changed man who would drift through life waiting to die. He is now, more or less, an aimless drifter.

I'm still working on my character. its just that this week is a 40 hour work week for me, not counting school and driving time. Next week is the same.


Group: Outlaw
Rank: Leader/Commander of all the outlaws in the state.
Weapon: A dagger in a back pocket of his pants, a pistol hanging from his side, and a shot gun carried by his horse.

(The one on the brown horse)


Group: Civil War veteran payed by the Union to help track down outlaws.
Rank: Dying legend
Weapon: One Winchester Pump-Action Shotgun, strapped against his back.


Appearance:
View attachment 1648
Personality: Liberty is a kind man when he isn't working. Only using a fraction of payment he received on ammunition and food, he gives the rest to the needy and the sick. He tries his best to keep his life as a killer separate, but there's someone always there who recognize him, a hostage he rescued from a roaming gang, a widow who asked for retribution for the murder of her husband. How he copes searching the plains for evil men to kill, a life spent taking the lives of the wicked, is a secret he keeps to himself.
History:

The paths of glory lead but to the grave.


He was named after the principals of his country, and by the end of the civil war, he would give up everything he had to honor liberty. The man would see his family killed by cross-fire, his home burnt to the ground, and all his dear friends. One day spent sitting with a childhood companion, huddled together by a dying fire in a fierce blizzard. The next, working up the strength to break the frozen ground with a dull shovel to bury his body. But he lived, through the suffering and sadness and terrible ordeals that made up his life.

When the war ended, he tried to restart, make a new life with a women he loved. But every night memories came back to haunt him. He became angry and confused, suffering bouts of frustration that would turn violent. He struck her in a fit of anger, and saw her fall to the floor, her face covered in blood. For all the things he had seen in his life, her pained face looking up at him shocked him more than every before. He knelt down to her, held her in his arms and whispered “I just can't do it any longer.”

The following day he took just enough money to make his way to the west, now riddled with violence and anarchy. He left all his possessions with his wife, expect for his shotgun. As he got into the stagecoach, he turned to her and said. “You're the only beautiful thing left in this world and I can't let the wrongness inside of me take that away from you. Find your way, make a new life. Keep this world beautiful. I was made to keep it ugly.”

Liberty works alone now, traveling from town to town, righting the wrongs no life-loving man would dare try. One day he may find a wrong greater than him. He's ready for that day to come. He's ready to be at peace, but not until he rids the world of as much war as he can. That's all he knows how to do.​

Alright, everyone who has posted a character sheet, they're all accepted. And I like your character, Dylan. :3

And I think people did die.. e.e I'll leave this up for another week or two, and if no one else decides to join..then, well... I'll just close it.
D