A Princess and her Alchemist (Rat Anthro/Hybrid Tale) 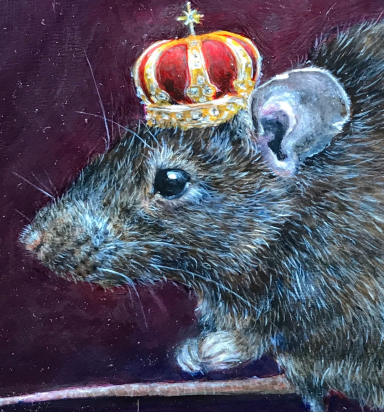 The Queen of Obscure Pairings

A Princess and Her Alchemist
( An Anthro x Hybrid Tale)
A tale of forbidden love between a Princess, and a Royal Alchemist. That begun has a questionable friendship, from onlookers. The two fear their true feelings will end up endangering/hurting the other. Because of this they hide their true feelings, even from one another. (contact me for the full story)

I am looking for Anthro Roleplayers (at this point I don't care Male or Woman, but preferable prefer males) who may be interesting roleplay as my character Ratty, along side by character Thistle.

Thistle was the out come of the Rat King, and his Human Bride’s union. Born the hybrid/half-breed princess and future heir to her father’s throne.

Thistle is an visionary. She can deviate from the crowd and go her own way. She is always after intellectual stimulation, constantly discovering something new, forming new opinions and stubbornly traveling her way regardless of what other people think. (like being BFFs with town’s ’ nutcase’…alchemist) Conventional people beware, Thistle likes to shock and deviate from the norm, this is how she lives. Thistle filled with paradoxes, she’s is interested in the opposite ends of the spectrum, she like to be alone, yet still ends up being a social butterfly. Thistle likes to experience both sides and see both opinions as she formulate new ideas with her forward thinking, and active mind. Thistle has a ‘live and let live’ policy where everyone is free to be themselves, and never judges others because we are all equal and entitled to our own opinions. Even if Thistle has been called out on her ’ policy’ as being hypocritical. She’s verbally skilled and very witty, she observe people and learn how to interact with others through observation. She can sort of be the master manipulation, in justifying anything she does or think.

As a result, she’s able to deal with any type of personality, and adapt to any situation. She welcome change because boredom is her enemy, even if it dose scare her. Anything new is an opportunity/promise to her.

Temperament - She is very a ambitious girl, she always has something she is pursuing and wants her life to be fulfilled and important. She loves the new and extraordinary, but regular routines are still acceptable. (She may merely alter them a bit every so often)

She will simply create her own drama and excitement. This makes her prone to stir up a situation out of nowhere just for something to keep her vivacious temperament satisfied. Thistle has an amazing ability to bounce back from any feelings of despair or unfortunate events. She hates to be unhappy, it hurts. She will take matters into their own hands and make things right again. Thistle has a very active mind. She likes being in control of her surroundings. She can be cautious but this is only to survey the situation before leaping in, she tries not to make hasty moves. She can’t accepted chance well, introduces it slowly so she can get used to it and incorporate it into her life.

When she comes into conflict with powerhouse type of people who will not take orders and not give an inch, Thistle will not budge her opinion, she will understand and accept opinions of others but she dose not take well to people trying to impose their beliefs on her.

Thistle most often has the temperament of a demanding, spoiled child but this is only shown if someone steps on the boundaries of her “kingdom.” She react this way because of her territoriality. Thistle can wait a long time for something she want, when the opportunity arises, she tries to plan her steps carefully. She knows that there is only one chance to succeed and she’s putting together the proper information she needs, that will help her complete the steps to accomplish her goals. She knows she isn’t just second rate.

Friendship - Thistle is a strong friend, and is always there to help, they are very sympathetic, caring and helpful to a friend in need. She will get you back on their feet again with a steady plan for success. There always seems to be something going on in her mind.Communication is key. You must be able to stimulate her mind, engage in a friendly, witty verbal battle but do not expect to come to any conclusions, this is not the point. She crave the brain exercise. If you unable to keep up with the intellect and the unconventional ways that Thistle is known for, you might want to look elsewhere. Thistle needs communication compatibility more then anything else.Have variety in your play dates, think of interesting things to do, but if you can’t think of any crazy idea, leave it up to her to make plans but do not be surprised if she change the plan in the middle, be flexible like her. But be warned she can easily ’ zap you ’ if you decide to lie right to her face or back-stab her in the back (multiple times), this ends up being to troublesome(and hurtful) for her own well being. She is known to forgive easily(for many repeated offenders), just as easily as she can drop you.

Romance - Deep inside, she is romantic and loving but only the right man will be able to expose this. She is perfect for the man who likes a challenge. You have to woo her and court her like the lady she is. She will dominate and control the relationship but in her intriguing subtle way, let her take the lead, she won’t steer you wrong! She will lead the relationship in the right direction. She will offer you a long lasting, real, loyal relationship with all the right ingredients for happiness.

~ Ratty (The Royal Alchemist) ~
X X
Age : Mid 40s
Sex : Male
Race/Species: Rat Anthro
Occupation: The Royal Count Alchemist
Family: Deceased/Orphaned
——
Sir Ratty, is the Royal Court Alchemist, who is frequently busy in his lab looking for new and strange ills, and their cures. While making EVEN! stranger potions and narcotics. Very cheerful, it takes a lot to anger him. He also has a strange case of paranoia that fluctuates and has a bad case of the stutters.

Ratty lives in two worlds, the real world and his spiritual/mystical world. Where he can interpret what he sees, into what he wants. He does this to avoid all the realities of pain and suffering in the world. He has extremes of emotions that are both good and bad intensively. He has a formidable intuitive ability. He’s very good at understanding people for he has the ability to delve into the psyche and see behind a person’s motivations’ He is not the pushovers that he may seem, in fact he has strength of character and will stand up for what he believes in, and works hard to reach his goals and to get his point across.

Temperament - Ratty’s personality is hard to pin down, it is very mysterious and elusive. He is molded by his surroundings, he incorporate his experiences and surroundings into himself. He has extreme compassion and he feels the pain of others. If something is wrong it affects him, it affects him deeply, he takes it to heart and feels extreme feelings regarding the matter. When hes happy, he is extremely happy and when he’s sad, he is extremely depressed. Ratty can easy fall into a pit of self-pity and self-undoing When he is inspired by life’s events, his creativity comes shining through. Besides alchemy, he is excellent at anything that tugs at the heart strings, such as poetry, or the mystical/spiritual. He is extremely creative and can use his skills of creativity and understanding of people to inspire others. Unfortunately, with this theories, and views, the kingdom’s dubbed him the ’ Nutcase’ or ‘Crack pot’ but he is none for those things. Though still respected, by the King and his Subjects, in some convoluted why, they still manage to find ways to use, demean, degrade him. As Ratty remains calm, never letting their bulling get to him, though it hurts him deep down. ( ’ concealed dont feel ’ It is not in his position to complain. He as been ridiculed, since his late childhood, he’s gown use to it.,..But doesn’t change the fact that it is painful, but his tears stopped flowing ages ago..)

Friendship - Ratty will go out of his way to help a friend. He’s extremely sensitive and loyal. He will take a friend’s problem and make it his own and suffer with them. This is the weak spot of Ratty. Even though Ratty will offer aid to friends, he wants his friends to find the real answer on their own. Fearing if he helps them fully they may lose their own thoughts and views. Making them not be able think of themselves. He will help them, but only if they are willing to help themselves. He wants them to ingrain the lessons and teachings (that he has taught them) into their own minds. So they can rely on themselves. He can at times be over protective/stalkish, when he finds(or over hears) his friends hanging with a new people, or a new crowd. He most likely will not be content, unill he meets his friend’s new friends. Then from there he will decide if they pose a threat, or not to his friends. And it’s because of Ratty’s paranoia, it makes it hard for people wanting to befriend him. ( Which only adds to his own paranoia, as well.) What draws Ratty is talking about spirituality, the occult, astrology, anything that is out of reach of the real world. He will easily get lost in a good conversation. He needs strong positive friendships. He loves adventure, new situation and social events and will be up to doing almost anything that you suggest. Make him laugh. He is not conservative, so do not be afraid to talk about unconventional or strange things, he will be impressed by that. He is a sucker for flattery give him compliments and tell him in a roundabout way that you admire him. Be sensitive, generous and gentle, make him feel comfortable with you and make him feel good about himself, and all will be smooth sailing!

Romance - Ratty the ultimate romantic, the sensitive man who feels for women. However, he has such an ideal of romance that is unrealistic. This man lives in the world of dreams and he needs a woman to keep him grounded. (or a woman with similar ideals) He needs a woman who can dominate him, but very subtly. She has to be able to help him steer clear of bad habits and bad thoughts. He sensitivity, generosity and compassion, nurture him and he will nurture you back. A fulfilling emotional relationship for the strong yet sensitive woman.


MY ROLEPLAY REQUIREMENTS
♦ Seeking Older Males expedience roleplayers. I want one on one, ' Hard Core Roleplayers', action. Ones that always need their daily fix, just like I. Who loves to escape reality, by entering their own words. Or ones wishing to add to already established already worlds, known as fandom.

♦ Seeing as I do ' One on One ' roleplays It goes without saying, that we both will have to play multiple characters.

♦ I only do long terms. I'm in this for the long run, while seeking long lasting friendships.
Am a possessive and faithful roleplayer.

♦ No one liners. A love detailed paragraphs. And if you're on roll, all the better. I absolutely love it, when my partner ends up writing a “novel” gives me more to work with. I'm not a Grammar Nazi. I merely require your writing to be readable. Clear and understandable.