Jennifer was having a horrendous day. The deal that she had been working on for nearly a year had fallen through, but that wasn't the cause of her consternation. Her boss had taken over the negotiations several days ago, saying that she was incapable of doing her duties and that he would close the deal in no time. But what he didn't realize was that the reason things were taking so long was because the Japanese had a particular way of conducting business and that his style of negotiations was going to offend them. Within five minutes of meeting him, the Japanese businessmen refused to continue negotiations because they did not wish to do business with a company that hired such intolerable employees. Her boss had laid the blame squarely at Jen's feet, asking her to abdicate her position.

Rage was just one of the emotions she was feeling. What a prick, asking her to resign for doing absolutely nothing wrong. But that was fine by her, because she was feeling ignoble enough to use her feminine wiles on him. She had seen the way he looked at her. He wanted her; she was going to use that to her advantage. Carefully adjusting her blouse to show just the right amount of cleavage, she opened the door to his office. She smiled. This was going to be fun.

"Come to give me your two weeks notice?"

"Not quite. I was thinking something...a little more fun. To remember me by when I'm gone" she said, walking over to his desk, carefully straddling him in his chair.

"Hmm, you mettlesome little girl, willing to...beg for your job. That's the spirit." He smirked.

She smiled at him. "Tell me what you want to do to me," she said as she nonchalantly flipped the switch to his intercom on.

"I want to fuck you like the little whore that you are."

"Excuse me? I don't appreciate being talked to that way. Do you talk to all your female employees that way?" The stunned look on his face was priceless as he quickly realized what she had done.

Parker's lips curved into a smile as she shook her head, one hand curling around the other. She glanced up at the man before her, through thick ebony lashes in a way she was all too aware justified every word he spoke. It was wrong, perhaps... ignoble, to prey on his weakness, but he had placed his cards on the table with hesitation, and when a snake had a mouse, it did not release it from it's grasp out of pity for the squeaking, "Not a complete idiot, Fran, darling. And you can't abdicate responsibility for your actions, entirely. This isn't the first time you made this mistake. Or need I remind you that while Mauser knew exactly what she wanted, so did you."

Consternation filled the man's electric blue eyes and sitting up, his mouth pinched into a deep frown, "How did you know it was Mauser?"

"Because she called me, Fran." In her lap, her purse felt heavier than usual. The weight of the gun seemed nearly preternatural, and as she uncurled her hands, she reached for it, letting her fingers rolls smoothly around the butt, "She called me, and she told me everything."

Fran Ramstein's tongue darted across his lips and the man swallowed, anxiously, porcelain coffee cup rattling against the matching saucer, "Meddlesome bitch. So... so what are you going to do?"

"I could kill you. You've no idea how easy it would be..." Her finger curved gingerly around the trigger, resting there a moment, "In fact, it's what I was sent here to do. And I should, for all you've done." Another flash of panic rolled through his eyes and she laughed, softly, "Relax. I've had many opportunities to pull the trigger, Fran. But I'm not going to. Not now. I want you to remember though... I could have. Remember that, and next time you try to screw us over... Don't."

Rising, Parker bowed her head and turning on her heels, she stalked towards the door of the cafe. Behind her, she could hear Fran reaching for his phone and her lip curled up as she shook her head. Someone else would finish the job... He was a wildcard, and they couldn't have that. But in the moment, she was almost sorry to see the man go...
Last edited: Jan 3, 2018
Reactions: PoetLore 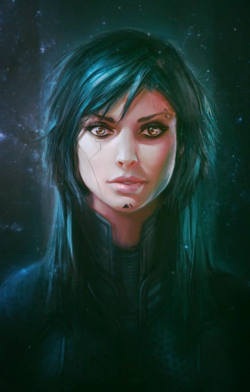 "You ignoble woman!" The commander of the enemy army spat at Nagère's feet, his face red with fury. His eyes were bulging and appeared close to popping out of their holes. The soldiers standing behind him, all ranks confused, looked at one another and whispered. Fear was was written all over their faces.

Nagère revelled in their consternation, drinking every last vision of their last moments of sovereignity.

"Abdicate. It is the only way you will survive." The coldness of her voice took the commander aback, but his jaw tightened again. Nagère could tell he was not going to let go this quickly. "Now is not the time to be a mettlesome leader. I will erase you from existence if I must."

Without hesitation, the commander bellowed a war cry that resonated across the fields behind him. A wicked smile spread across the cyborg woman's face, bright white teeth showing and the blues of her hair catching bits of sunlight. She looked positively calm in the face of thousands of charging soldiers.

Nagère rose her arm, and in her palm was a icy blue orb. A few soldiers slowed down, but it was the whispers behind the conqueror's back that made her smile stretch even further. Her plan was wile but that was exactly how one dominated the world: breaking those who shall not bend.
Reactions: PoetLore

Kelly stood in consternation as she gazed upon the pile of rubble that had once been her home. What was she to do? Where was she to go now? Her feminine wiles could only get her so far. She had been queen of the block, ruling from her apartment high above the dirty city street. Now, to be forced to abdicate her throne, she was nothing. She was less than nothing. She was just another street urchin with nowhere to go.

But Kelly knew better than to give up. She was mettlesome, after all, and she could make this work. Straightening the collar on her coat, she stuck her hands in her pockets and trudged down the street.

The streetlights washed the street with their amber light, causing her shadow to grow and change, to morph and distort as she made her way. It wasn't long before some ignoble soul stepped out of the shadows and called to her.

"Oi, girlie, where ya headed to on such a fine night. Why don'tcha stay a while and keep an old man company."

She shrugged, knowing what he wanted was more than company, but as she followed him he lead her into a building. A slow smile grew on her lips. This was perfect. A narrow staircase ushered them up to the top floor of the dilapidated high-rise and he ushered her into a small apartment. There was a door off to the left, leading into what was probably a bedroom and the room opened up to the right making space for a small kitchen and dining room. The furniture was old, tattered, and falling apart, but it was nothing she couldn't work with. The man just kept babbling. He never did stop talking until the shock of her blade in his belly screamed at him to shut up. His eyes went wide with shock before filling with pain, and eventually fading with death.

Kicking the body out of the way, Kelly's grin grew. She'd found her new home.

The corporate world was a dark and dangerous place at times. True excellence rarely got the attention and recognition it deserved, much to Andrea's consternation. It was usually the ignoble, boot licker or or overt panderer that ended up getting ahead. She however, was mettlesome and full of fire and determination. Unwilling to be a bedfellow in order to get ahead, or to kowtow to idiots, or to pretend she was a daft Barbie doll, she kept working and allowing her strengths and advertising savvy speak for themselves.

Her main adversary was Jeanette, who was not above using her Polynesian beauty to get ahead. She chose not to use those particular kind of wiles and she was going to show it could be done without it. Jeanette held the throne at the moment but she was sure that one day her superior mind and abilities would force her to abdicate.
Show hidden low quality content
You must log in or register to reply here.
Share:
Reddit Pinterest Tumblr WhatsApp Email Share Link
Top Bottom