The tears streamed down the satin cheeks of the girl, whose head was bent in sadness over the delicate white sheet of paper spread before her. Wracking sobs shook her body, the toilsome breaths gripping her lungs. Her tears made a further mess of the once snowy white papers, which were already smattered with an unctuous substance that had spread itself in an arborsescent pattern. The documents were beyond saving, which was the cause of her tears.

It was easy to provide a posit of their ruin, it was another thing entirely to accept this, no matter how specious that argument for its inevitability. With no hope to be had, she sat alone still over the papers still.​
C

Steve woke up in a stupor. He had gone out with some friends last night, got too drunk, and when he had returned home, had forgotten to do something: pick up a Christmas tree for his kids. They kids would be dropped off in about an hour; he still had time. He posited that the only specious thing to do would be to make his own tree, and with that in mind, he went to work.

Luck was on his side; he knew exactly what to do. Grabbing the keys to his car, he opened the trunk and pulled out his lighting tech gear. All he needed was the lighting tree, and within minutes he was back inside, the toilsome task of decorating the tree ahead. The decorations were stored in the basement. When he had opened the box, most of them had been covered in an unctuous substance. Steve rummaged around in the box, searching for decorations that were dry. His task done, he ran back upstairs and decorated the tree as quickly as he could. It didn't look particularly arborescent, but it was the best he could do in such a short time. And just as he was attaching the kids stockings to the lighting tree, his ex-wife's car pulled up, signaling his children's arrival. As they stepped in to the house, he greeted them, and led them to the makeshift Christmas tree.

"I present to you, the Christmas Lighting Tree!" 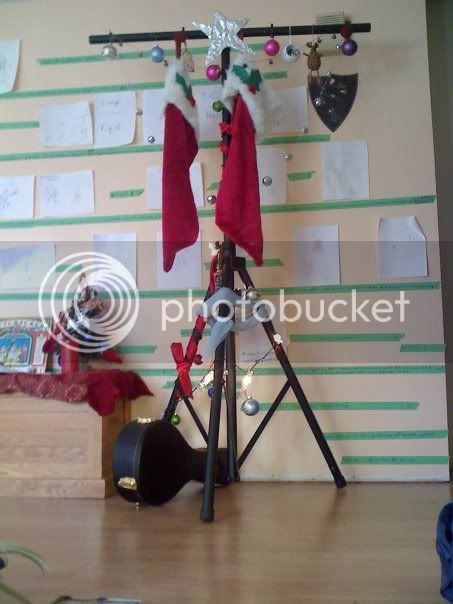 (not a true story, but we did decorate a lighting tree at my band's house :3)

Jonathan pulled the hideous white arborescent pieces out of the box and stared at them. Why he always lad to be the one to help Grandma put up her weird idea of a Christmas tree defied specious explanation, but here he was yet again undertaking the toilsome task.

Grandma had very specific ways of doing everything and her tree was no exception. The whole endeavor had a well choreographed posit that was followed strictly every year. Tree assembled, lights evenly spaced next, ornaments placed at precise intervals, garland interwoven, and finally icicles placed one strand at a time and lastly, the star placed atop. That star was the bane of his existence. WHY last? every year he asked and every year he got the same answer, "Because that's how I do it."

He was getting pretty used to the flow of it after five years though, and he'd even brought a bigger ladder this year to make the star positioning easier. he gathered up all the boxes and storage totes and put them back in her attic until he'd have to come back and repeat the whole process in reverse a few weeks from now.

Now came the Grandma hug, complete with the unctuous feel of well lotioned limbs and the obligatory kisses to each cheek in thanks. So ok...maybe it wasn't so bad, he thought as he took a cookie of the tray she'd made him.
Show hidden low quality content
You must log in or register to reply here.
Share:
Reddit Pinterest Tumblr WhatsApp Email Share Link
Top Bottom