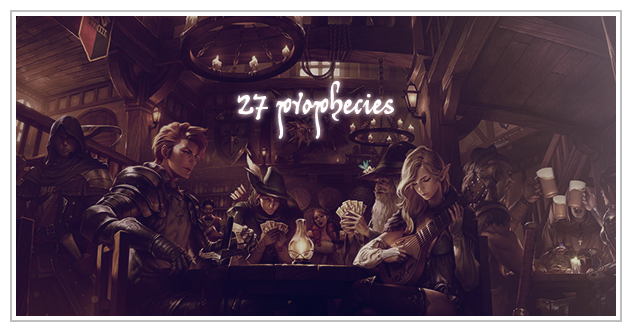 27 PROPHESIES
Aug 25, 2022 at 3:00 PM ​
Strange things are happening at a local wizards tower in the middle of nowhere, and a haphazard group of strangers unwittingly bear witness to a prophecy coming true. In fact, it's one of 27 prophecies heralding the end of the world.

Will anyone realize what they've seen? Will they join a quest to save the land from evil?

WHAT: In our first session a pair of individuals witness something real strange with bones coming to life! Supposedly because of an old wizard that lives in a nearby tower. For this session, strange things are happening at the tower! You do not have to be someone from the first session. This is a high fantasy world, so you can be just about anything! Most people have heard of the "27 prophecies" but almost no one knows what the actual prophecies are.

WHERE: Join us in the 27 PROPHECIES chat room. You'll find the link to our chats in the CHAT tab when it's time to play.

And I will inevitably post my characters here. 8D

After a year of hard travel and scraping by, she found her way to the village of Snowdrop Hollow, in time for another holiday festival she hoped would leave her in better straits than the last one.

And it did...sort of. After an encounter with a mysterious old man telling tales of fey magic, she left Snowdrop Hollow with a chest containing equally mysterious items, including a cryptic map. Without a better destination in mind, she followed the map's course, which led through another village. As she drew near this next stop, she passed travelers with warnings of a monster that stalked the town.

Shara does not know exactly what happened after her arrival in that village; she woke up to find herself and a few other adventurers were the only survivors of a massacre. Together, they sought answers, ultimately confronting the shape-shifting monster responsible for the killings. With the death of the creature, the village caught fire, and Shara was forced to flee.

Following the map given to her by the old man, Shara found herself in another isolated village, with a run-down tavern as the only place to find rest and refreshment...

Sword:
Shara carries a well-balanced arming sword that is small enough for her to conceal under her cloak, but able to deliver quick cuts and thrusts.

Key: Shara does not know what lock this key might open. As with the other items in the chest, she was told that it would come in useful for her quest to free her family, "at just the right moment."

Bottle of wine: The bottle looks valuable, and it does seem to contain wine, but Shara has not opened it.

Cryptic Map: The map looks very old, and it seems to be of the local area, with a course leading through a few of the small villages along the lake, down the river, and up into the mountains. Nothing on it indicated who made it or where it came from. Or even what would be found at the end...
Last edited: Mar 8, 2022