Hello i'm looking for a roleplaying partner. I like to do Supernatural the show roleplay, legends of tommorow, the flash, x men, a superhero high type, and many more. Just ask me if i like a different role play you don't see here. I play only female roles.

Rules:
I'm open to romance in roleplay i'm fine with FXF or FXM
I'm open to different types of ideas of roleplay and stories.
Please try to stay active as i want this to be a long lasting roleplay.
If something makes me or you uncomfortable please stop.


I have many characters such as 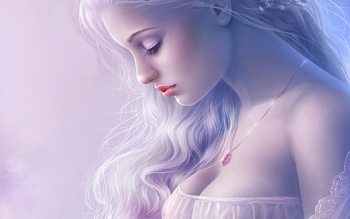 Appearance: She has pure white eyes and hair. She normally wears sunglasses as she is ashamed of her eyes. She likes to wear a long black sleeved shirt with a Red skirt and black pumps. She has a blue crystal necklace the last gift she got from her mother. Her skin is clear and slightly pale. She has a thinner build and is about 5.5 in height.

Personality: She is very shy and doesn't talk to others. She does warm up eventually and starts to talk more once she gets to know someone. There a many reasons why she doesn't like to talk. Most people she has met often run away from her in fear. She wonders whats the point of talking and trying to make friends if they just run from me. Her white eyes made her a freak and they aren't like a blind person they are pure white. She also feels everyone emotions so she is constantly feeling confused and doesn't know what to do. Even though she suffers through everyone emotions she is very gentle and kind to others if they need help even if they will end up hating her. She hates to hurt people but will do it if she absolutely have to.

Power: She has Angelic light she can use to heal people. She can transfer wounds or heal them. She will feel when someone is in pain and she also feels there emotions although she isn't reading there minds. She feels if they are angry or sad. If someone is shot she can feel the exact pain and where its located. She can use her light for more than just healing. she can use it as a beam like a lazer or to temporally blind someone by shining it into there eyes. She has also learned to forge light by manipulating the angelic light into a more solid objects such as weapons such as a whip or a bow to fight with. She hasn't learned to do this yet but its in her range to do.

Strengths: She is very agile and quick on her feet. She was a cheerleader and in track she also was training in acrobatics so she can do some pretty amazing gymnastics.
Weaknesses: She can grow very tired from using her powers to much. She can also be overwhelmed by others pains and emotions. If she isn't concentrating she can accidentally absorb someones wounds. She isn't the strongest and can get hurt easily. Also the worse the wound the harder it is to heal and the more energy she has to use.

Bio: When she was in highschool she went out on a date with her boyfriend at the time. While they were heading to the movies they were mugged. The man shot her boyfriend and left them. She quickly ran to her boyfriends aid and cried not knowing what to do. Thats when her powers manifested and her ice blue eyes turned white and her blond hair turned white. She healed him and he freaked out calling her a freak and a monster. He called the cops on her afraid of what she was and she is currently on the run. She never got to say goodbye to her family but they agreed to her arrest. She was devastated and has trouble trusting people now.

Anything else: She loves to draw and sing to express herself. She often draws things she sees such as flowers or forests. She also writes her own songs or sings songs that make her feel happy or express how she or others feel. She knows her parents have disowned her so she has no where to go.

Or i would also like to be this character or both

Appearance: She wears a long red dress shirt that covers her arms with black tights with long black boots. She had blonde hair which changed to ice blue when her powers activated. She had violet eyes her eyes are now ice blue. She has a small silver anklet she always wears. She doesn't know how she got it but its something she never leaves behind or takes off. She often wears gloves afraid she might freeze something she touches. She is about 5.5 and is about 115 pounds. Her skin is extremely pale .

Personality: She is very distant and doesn't talk pretty much at all as all her time in the labs taught her not to speak. If she tries to talk she normally will start to talk before shutting her mouth afraid of being whipped. She normally talks through her body language. She doesn't not trust anyone at all. If you do gain her trust and become her friend she will defend you no matter what. She is very loyal to people who are loyal to her. However it takes a lot to show her that she can trust you. She hates killing and bullies and is quick to defend people who cant defend themselves.

Power: She has cyrokensis but its upgraded from the experiments. Her ice powers can actually burn people from how cold it is. She can manipulate snow, ice, or cold wind that she didn't even make. She can send ice blasts or incase her self in ice. She can make it snow or freeze the ground or other objects. She can freeze water and even fire. She can breath ice breath to freeze people. She can make ice weapons like a sword even a bow and arrow where she makes ice arrows to fire. She can make ice walk ways to move around on. when she is scared her breath becomes chilled and visible. There are many other things she can do with her ice she doesn't know about yet.

Strengths: She is very intelligent and has incredible strong powers from the experiments she had to suffer through. She is very quick on her feet and can hold her ground.

Weaknesses: She can get frightened easily especially by scientists. She can be sometimes rash and run into situations to help people just to be overwhelmed. She doesn't like to talk so sometimes it can be hard to be on a team with her. If she is overwhelmed it could be hard for her to use her powers.

Bio: When she was born she was sold into slavery. From there she was taken to a lab to be experimented on as they were trying to make mutants more powerful so they could use them as weapons. Both her parents were mutants and they believed she would be one too. She grew up in the lab and every time she tried to talk she was punished by whips or being cut with a knife. She has many scars from this and decided not to talk anymore. When she was 13 her powers activated and they were hyper charged from the experiments. She used these new found powers to escape the labs and lived on the streets just trying to get by. Because of there experimentation she is immune to telepathy's and mind control as they were trying to create a living weapon that couldn't be turned.

Anything else: She likes to write poetry and loves to be out in the forest. She often writes about her feelings or about nature. She loves to be out in the forest as it reminds her that she is free and that she hopefully won't be experimented on again. She has no idea who her family is but doesn't care as they sold her away. Till this day she is terrified by needles and will have a panic attack when she sees one.

For heroes or something else

Name: Lyla Winchester Age: 15 Species: Human/Demon or Angel depending on the story. Job: Hunter Personality: can be brash and stubborn but is also very gentle and kind. She can also be shy when she meets people for the first time. Status: She currently walks around helping who she can. Sam and Dean had helped her once but Sam had no idea I was his daughter. Now I wait for the day when I get to tell him the truth. Powers: She has the powers of a nephlim she also has visions about the supernatural creatures similar to her father.